The Complexity of Revenue Recognition in China Just Got Worse

Part I of a Two Part Series

Foreign firms doing business in China generally recognize revenues and track their results of operations under multiple types of accounting principle bases; PRC tax/GAAP basis (which is a statutory requirement for the annual Corporate Income Tax (CIT) filing), US GAAP or IFRS or other foreign GAAP (the reporting accounting principles used by the parent company or foreign entity operating in China) and other tax revenue recognition bases such as reporting under the VAT regime.

To add to the complexity of the above, on May 28, 2014, the International Accounting Standards Board (IASB) and the Financial Accounting Standards Board (FASB) jointly developed and issued a comprehensive new revenue recognition standard that will supersede nearly all current revenue recognition rules under both IFRS and US GAAP. This standard is – Revenue From Contracts with Customers Topic 606 under US GAAP and IFRS 15 under IFRS standards.

The effect of these changes on entities operating both in China and abroad will vary, and some may find the new standard brings benefits to financial reporting as well as significant changes in the way the entities recognize revenue. The guidance was designed to align US GAAP and IFRS revenue recognition standards as well as “enhance the comparability of revenue recognition practices across entities, industries, jurisdictions, and capital markets.” The new principles- based guidance provides a framework that can be applied to “all contracts with customers regardless of industry-specific or transaction-specific fact patterns.” Additionally, the disclosure requirements will also improve an entity’s financial statements description of its revenues.

Early adoption is not permitted under US GAAP but is permitted under IFRS. Because the cumulative effective of the change will be required to be presented at the beginning of the adoption period under both US GAAP and IFRS standards, entities should immediately begin assessing how the affect on their current revenue recognition practices and prepare an implementation plan for the new standard.

IFRS revenue recognition standards were not as fully developed and were based on fundamental principles different than those used in US GAAP. Because IFRS lacked specific guidance on certain complex topics, many times entities used or emulated US GAAP over those topics.

Previous disclosure requirements about revenue under both sets of standards have been considered insufficient for allowing financial statement users the ability to meaningfully analyze an entity’s revenue.

In additional to the external reporting requirements to their MNC or foreign located parents, foreign invested and/or listed entities in China must report revenues according to statutory requirements. For annual CIT filings, PRC GAAP or PRC tax basis must be used. Each entity is required by law to maintain a set of books on the PRC basis. There are various rules under this guidance relating to revenue recognition, such as for the sale of goods – certain conditions must be met simultaneously. Those conditions are in alignment with the IFRS guidance over revenue recognition.

Under the VAT regime, which is a turnover tax levied on income rather than profit, the timing at which the tax liability on the sales of goods or taxable services arises is specified according to different methods of settlement. For example, for sales of goods where a direct payment is made, it shall be the date on which the sales sum is received or the documented evidence of the right to collect the sales sum is obtained, and the bills of lading are delivered to purchasers, whether or not the goods are delivered. Other methods apply to other situations, such as when the sales amount is entrusted for collection or the sale of goods on credit or by installment payments.

The New Revenue Standard – Revenue from Contracts with Customers

The Standard applies to revenues or income from ordinary activities relating to a contractual arrangement with a customer. Leases, insurance, financial instruments and a limited number of other types of transactions are excluded from the scope.

According to the guidance “The core principles of the guidance is that an entity should recognize revenue to depict the transfer of promised goods or services to customers in an amount that reflects the consideration to which the entity expects to be entitled in exchange for those goods or services.” In the guidance, there are five steps for an entity to undertake in the process of determine if it is appropriate to recognize revenue:

Step 1: Identify the contract(s), which represents an agreement creating enforceable rights and obligations with a customer.

Step 2: Define and separate the performance obligations in the contract.

Step 4: Allocate the transaction price to each specific performance obligation in the contract.

Step 5: Recognize revenue when each performance obligation is satisfied.

Other aspects of the new standard address certain specific concepts such as principal vs. agencies, warranties, sale with right of return, repurchase agreements, consignment arrangements and various other issues.

Qualitative and quantitative disclosures are required regarding the nature, amount, timing, and uncertainty, if any, of revenues and cash flows arising from contracts with customers. This information includes revenue from customers and any impairment recognized, disaggregation of revenue, and detailed information about contract balances and performance obligations. Another additional disclosure that is required involves what significant judgments and changes in judgments were made in determining the timing of completion of the performance obligations how management determined the appropriate transaction price and how amounts were allocated to performance obligations. Also, any assets recognized from the costs to obtain or fulfill a contract should be disclosed.
Consequences of the Change and a Plan to Minimize Risk 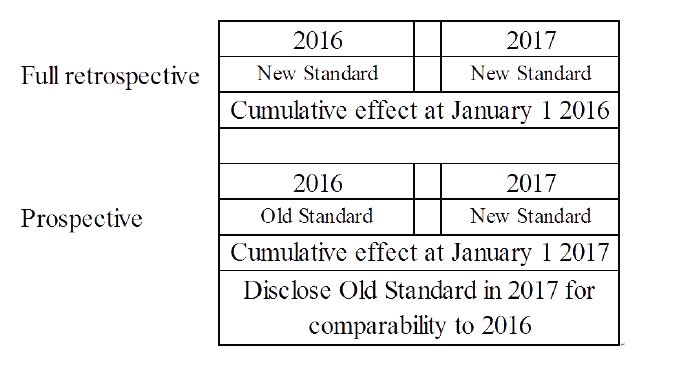 The guidance allows some practical expedients when applying this standard retrospectively such as an entity not needing to restate contracts that begin and end within the same annual period and allowing the use of hindsight on variable consideration contracts.

The upcoming changes in revenue recognition under US GAAP and IFRS and likely changes many entities will make in response to the new standard are expected to impact not only financial reporting, but many other areas of an entity, such as business operations, system development and have potential tax implications as well. Entities are well advised to begin an analysis of how the standard will affect them. An implementation plan for the new standard is further recommended and that plan will vary from entity to entity, depending on the breadth and depth of impact expected.

In Part II of our two part series on the change in the revenue recognition standard, we will examine suggestions for how to transition to compliance with the new standard.

To read Part 2 of this article, please click here.