On August 31, 2018, the IIT law amendment was finally passed by the national people’s congress of the PRC, and it will enter into force as of January 1, 2019.

The new IIT amendment introduced a basket of new changes that affect each level of the IIT system at its calculation, application, and enforcement stages. The key amendments include:

1. Introducing the concept of resident and non-resident;

The proposed changes, will signify an overhaul of the IIT system. We set out the detailed analysis as follows:

1. Introduce the concept of resident and non-resident

According to the old IIT laws, the PRC IIT is levied on the worldwide income of individuals who have been domiciled in China or who have been resident in China for at least one year.

As a concession, an individual who was not China-domiciled and had lived in China for one full year, but not more than five years, was  taxed only on the portion of his or her income derived from services rendered in China pursuant to the holding of an office, employment, or the performance of a contract in China.

A non-domiciled individual who had lived in China for one full year but not more than five years was subject to tax on employment income derived during his or her working period within China from a Chinese enterprise or employer or from an overseas enterprise or employer. If employment income was derived from a period of work during a “temporary absence” from China, individual income tax is payable only on the portion of the income which is paid by Chinese enterprises or Chinese individual employers.

Once a non-domiciled individual has lived in China continuously for more than five years he or she would then pay individual income tax on his or her worldwide income, i.e. all income derived from within and from outside China, for every full year spent in China, beginning in the sixth year.(Reference: Guoshuifa 1994 No.148, Guoshuifa 2004 No. 97, Guoshuifa 1996 No. 199, Guoshuifa 1995 No.125).

According to Guoshuifa 1995 No. 125, “The IIT of an individual who concurrently holds separate positions in enterprises or institutions within and outside the territory of China will be determined on the basis of the total amount of income derived by the taxpayer from wages and salaries, in accordance with the relevant provisions of the Individual Income Tax Law of the People’s Republic of China (referred to in this Notice as the Tax law) and the Notice, and the actual working period within the territory of China, regardless of whether his or her wages and salaries are determined separately according to each post held.” Under this regulation, where the Individual had not breached the five year rule, then they could claim exemption from tax for days out of country according to a pro-rata formula.

In the new IIT amendment, it has clearly defined the concept of Resident and Non-resident, and lowers the threshold for tax residency from one year to 183 days, in line with other major tax jurisdictions and double tax treaties that China has in place. In other words, an individual would be deemed a resident for individual income tax (IIT) purposes if he or she resides in mainland China for 183 days or more within one tax year. Therefore, the PRC tax authority has the tax jurisdiction for foreigners who are not domicile in China and but stay in China for more than 183 days.

What is not clear though is whether or not the five rule regulation is continued. The new regulation replaces the old IIT regulation, however the five year rule is a separate regulation covering foreigners working in China.

The old IIT Law provides for different tax rates on eleven categories of income, including income from salaries and wages, labor service payment, author’s remuneration, and royalties. Among these four categories, salaries and wages are subject to seven-bracket progressive rates (from 3% to 45%; see chart below) while the other three are subject to a proportional rate of 20% (plus a few category-specific rules).

The new IIT amendment aggregates taxes on different sources of labor income into a single income tax, which we called the comprehensive income scope. Wages, compensation for labor, authors’ remuneration, royalties are included in the comprehensive income scope. They apply the seven-bracket progressive tax rate, still from 3% to 45%, but with the income ranges in several brackets adjusted. The old and new tax brackets are as follows:

The new IIT amendment has reclassified “Income from production and business operations of individual industrial and commercial households” and “Income from contracted and leasing operations of enterprises and institutions” as “income from business operations”. The taxable income of operating income shall be the balance after deduction of the costs, expenses and losses from the total income amount in each tax year. The old and new tax brackets are as follows:

Based on the above analysis, the Draft Amendment includes a consolidation of certain taxable income categories, and changes to tax rates and the corresponding taxable income brackets, we summarized the changes as set out in the table below: 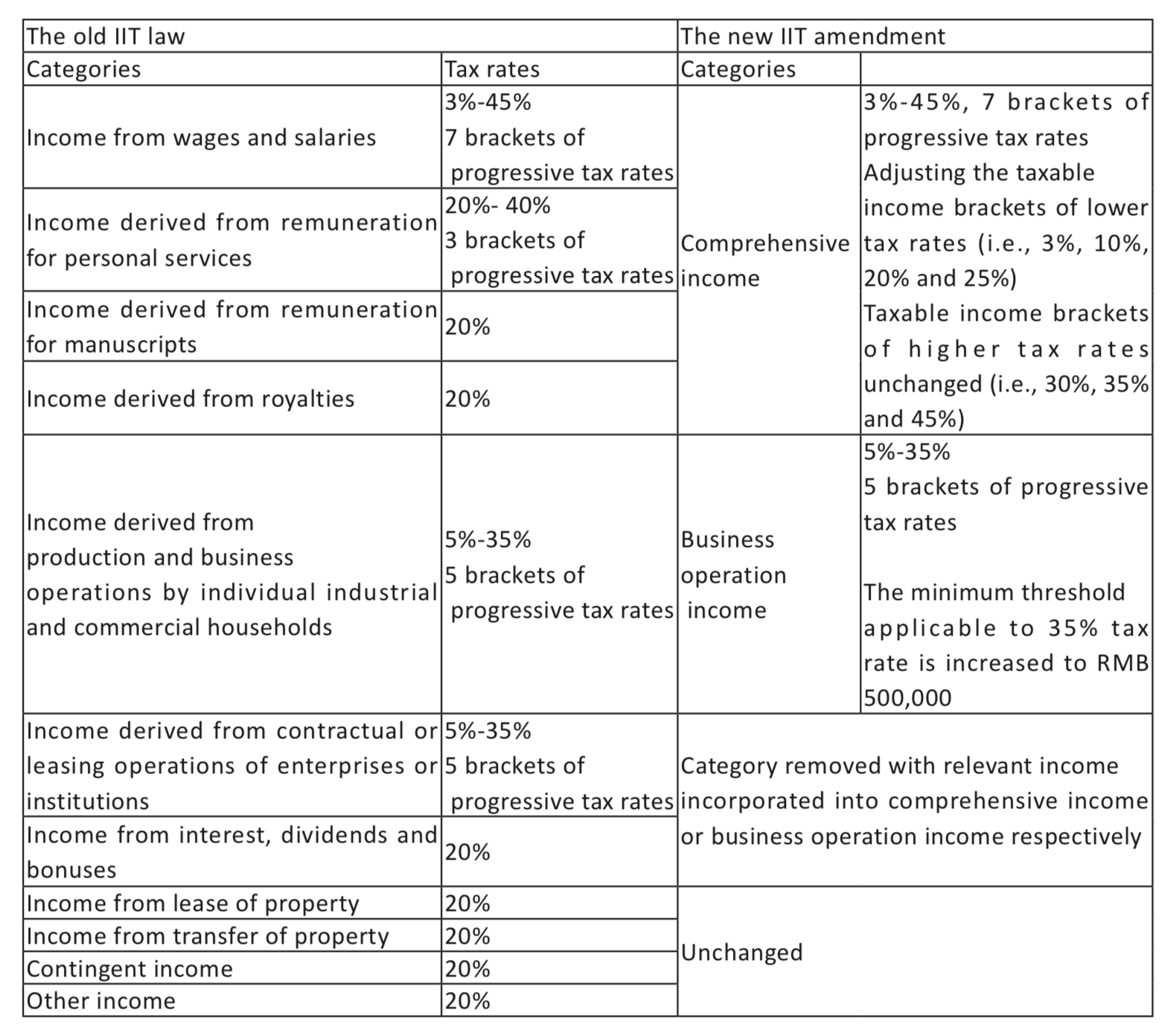 Under the new IIT amendments, income deriving from provision of independent personal service, author’s remuneration, and royalties will now also be subject to 3-45 percent progressive tax.

In effect, this is likely to increase the tax levied on income belonging to this income category, as the progressive rates will now be applied to the aggregate of the four types of Comprehensive Income, rather than just ‘wages and salaries.’ and three income types that were traditionally taxed at a flat rate of 20 percent are now taxed at progressive rates according to the tax brackets. Therefore, if the aggregate income of the ‘Comprehensive Income’ exceeds RMB 25,000 per month, the tax rate will be greater than the 20 percent flat rate previously applied.

The basic expenses was increase to 60,000 per year.

Major deductions that may be available for resident under the new IIT regime are summarized in the table below: 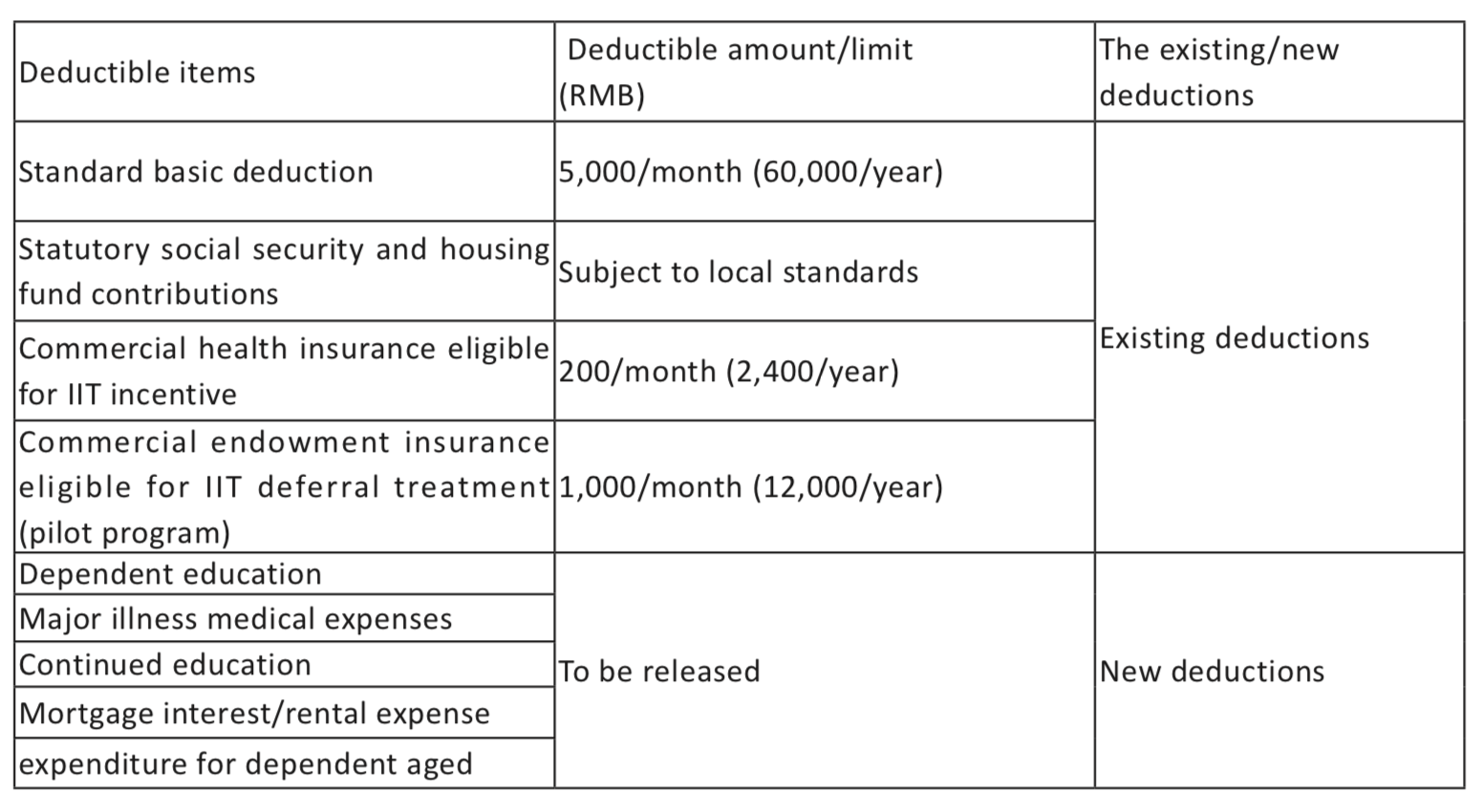 Further, Guoshuifa 1994 No. 20 has specified the additional deductions for expatriates,  it regulates that certain fringe benefits provided to expatriate working in China which are of a reasonable amount and on the reimbursement basis are not taxable. The above mentioned fringe benefits include:

·   Language courses and education expenses in the PRC;

The IIT for comprehensive income is calculated on annual basis, the withholding agent shall withhold the tax on a monthly basis, and the taxpayer shall, after the end of each year, make up for the underpaid tax or get a refund for the overpaid tax. By the end of the year, annual reconciliation can be performed if there is additional tax due or any overpayment. In the event of a tax resident providing information of specific additional tax deductions, the withholding agent shall not refuse to deduct the relevant amount while prepaying the monthly IIT.

For non-residents deriving consolidated income and in the case which there is a withholding agent, the tax payable shall be prepaid by the withholding agent on a monthly basis or based on the occurrence of the income, and no annual reconciliation is required. If there is no withholding agent, self-declaration is to be performed within 15 days in the following month upon receiving the income.

1) A taxpayer who derives consolidated income is required to perform annual reconciliation, should submit the annual IIT reconciliation return between 1 March to 30 June of the following year after receiving the income.

2) Any taxpayer, who receives taxable income but in the case which the withholding agent fails to withhold the tax payment, shall pay IIT before 30 June of the following year. In the event that tax authorities request to settle the tax payment within a given timeline, IIT shall be paid accordingly.

3) A taxpayer who derives income overseas should file tax return and settle the tax payment between 1 March to 30 June of the following year after the occurrence of the income. Deadline has been as extended as compared with the prevailing filing due date as of 31 January of the following year.

According to the new IIT amendment, tax authorities is entitled to make tax adjustments for the following arrangement:

·   Other improper tax benefits acquired by an individual by implementing unreasonable commercial arrangements.

Reviewing what is arms length or not, what is a controlled company or not, and cross border international income and business is extremely complex and can be open to interpretation. Our concern is that the regulation provides only a general outline which without further details could be interpreted in different ways by different tax officials.

6. The effective date of the new IIT law

According to the new IIT Amendment, the proposed effective date is 1 January 2019. Before that, it is proposed that the monthly standard deduction of RMB5,000 on salaries and wages can be deducted to calculate the taxable income and relevant parties can use the “Table 1 for IIT Rates” discussed above to calculate their monthly IIT during the period from 1 October 2018 to 31 December 2018. In the meantime, the “Table 2 for IIT Rates” would be applied to calculate relevant IIT – “income derived from individual industrial, commercial production and operating activities” – during this period.

It is positive that China has taken a significant step to update its IIT regulations and to seek to provide benefits to those that who have the costs of additional children or caring for dependents, and that the likes of insurances can be non-taxable up to limits. However, there are a lot of gaps in the regulation that need to be filled in, and uncertainties surrounding expatriates and their tax position in China, and it is hoped that these are clarified as soon as possible, and in particular that the Chinese Government maintains the existing side regulations covering expatriates. It is common in many countries for there to be laws covering everyone resident in that country and then there to be laws that provide concessions for non-domiciles in order to encourage them to invest into the country. It remains to be seen whether China seeks to encourage foreign talent to come to China, along with skills, investment and the job creation that comes with it.

LehmanBrown International Accountants is a licensed China-focused accounting, taxation and business advisory firm, operating dedicated offices in Beijing, Tianjin, Shanghai, Shenzhen, Guangzhou, Hong Kong and Macau, and with an extensive affiliate network throughout China and in over 100 countries worldwide.