The respective tax systems of the People’s Republic of China and Hong Kong have some key differences that a business operating in both tax jurisdictions should be aware of in order to ensure full compliance.

This brief article will explain the both systems and offer a simple comparison.

Mainland China
Tax is the most important source of fiscal revenue collection in the People’s Republic of China (“PRC”) making China more competitive as it has progressively opened up to the outside world and also promoting further development of China’s national economy.

Since the tax system underwent substantial reform in 1994 and a subsequent series of policies for optimisation and refinement since, China has built a tax system that is both conducive and adaptable to the market economy.

Under the current tax system in China as of 1st May 2016, there are Five Categories of Taxes which have been organised in the below chart according to both their type and function: 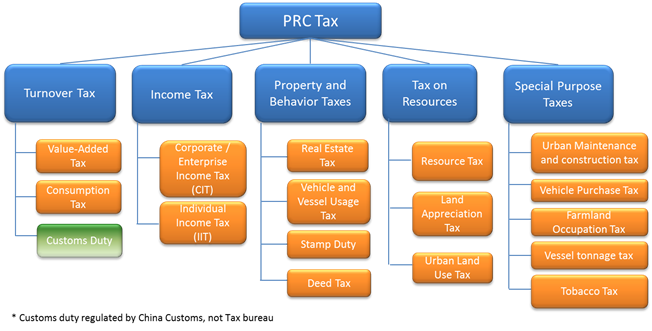 B2V Reform
On 5th March 2016, Premier Li Keqiang announced at the opening of the National People’s Congress that Construction, Real Estate, Financial Services and Consumer / Daily Life Services sectors would be included in the final phase of “Business Tax to VAT” (“B2V”) reform which has since come into effect as of 1st May, 2016.

From 1st May 2016 onwards, these four industries would be covered by Value-Added Tax (“VAT”) rather than Business Tax (“BT”). As such the policy of B2V tax reform will be completed, making China’s Indirect Tax System introduced in 1994 comprising of both VAT and BT obsolete.

The completion of B2V reform is expected to bring in a series of changes on VAT policy and administration which will have a profound impact on all enterprises operating in China.

According to Circular 36, the new VAT rates for construction, real estate, financial services and consumer services are as follows:

Hong Kong’s Tax System
Hong Kong has one of the most tax-friendly economies for business in the word making it a competitive destination for Foreign Direct Investment (“FDI”) and establishing an investment platform for global businesses or those looking to invest into the PRC.

The tax jurisdiction of Hong Kong is regarded as both simple and stable and only imposes four direct taxes as shown in the below chart. Hong Kong’s tax system also allows for specific allowances and deductions which can reduce a legal entity’s tax liabilities:

Based on the Territorial Principle, only Hong Kong sourced income is subject to Hong Kong income tax. Hong Kong is also known for its free port status and easy customs procedures.

Duty is levied on a narrow range of products such as tobacco (notably alcohol importing of alcoholic beverages is deemed Duty Free).

China Vs Hong Kong: A Direct Comparison of the Two Systems 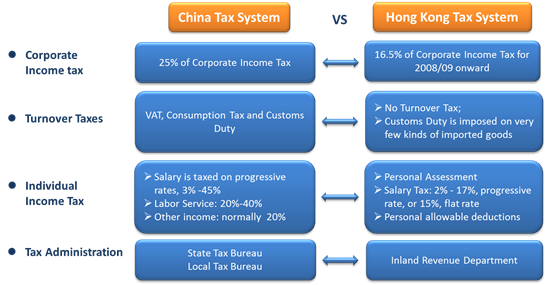 While in Hong Kong as previously mentioned, there is no Turnover Tax and Custom Duty is imposed on a limited range of imports. The PRC following the ratification and full implementation of B2V reform applies both Consumption Tax and Customs Duty on imported goods in addition to VAT.

Individual Income Tax
Individual Income Tax (“IIT”) is also taxed according to progressive rates of between 3% and 45% depending on income and applicable tax bracket. Service / Freelance Income is taxable at the rate of 20% for income of 20,000 RMB or below ranging up to 40% according to the respective income bracket. Under provision of services and income generated through freelancing, the total taxable income equates to 80% with 20% being exempted for business expenses.

In comparison, IIT in Hong Kong is calculated according to progressive rates of between 2% and 17% or on a flat rate of 15% and personal deduction is allowed on other non-related additional income.

Optimising the PRC and Hong Kong DTA
On 1st April 2015, the PRC and Hong Kong signed the Fourth Protocol of the China-Hong Kong Double Taxation Agreement (“DTA”) in Hong Kong.
When repatriating profits from Mainland China to Hong Kong, by way of dividend remittance a withholding income tax rate of 5% is applied, while with reference to interest and royalties, a rate of 7% is levied.
Only profit derived from or arising in Hong Kong is taxable under Hong Kong profits tax. If a taxpayer can arrange their business operations outside of Hong Kong, this would be deemed as such and is therefore exempt from Hong Kong profits tax. The Fourth Protocol of the China-HK DTA brings both benefits as well as tax obligations to the taxpayer. 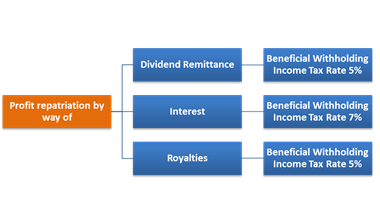 Both the PRC and Hong Kong authorities are committed to ensuring that the terms of the DTA are not abused and strive to work collaboratively in the facilitation and future information exchange concerning tax matters.

For more resources on Mainland China and Hong Kong tax, please contact us at enquiries@lehmanbrown.com