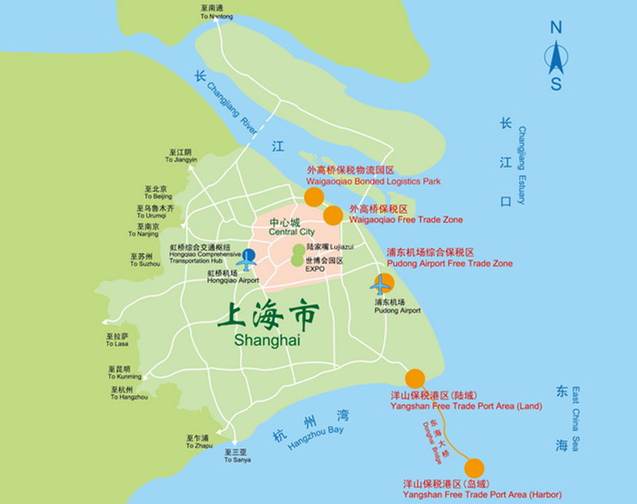 Chinese Commerce Minister Gao Hucheng has said that the zone is set to become a pilot project for economic reform, and a role model in efforts to upgrade the Chinese economy. The guiding principle is to develop Shanghai into an international financial center and trading hub by 2020, by loosening the government’s tight grip on foreign investment, the currency market and the banking system.

The intention is for the SFTZ to expand gradually to cover the entire 1,210 square kilometres (470 sq mi) of Pudong. Chinese Prime Minister Xi Jinping has announced that the FTZ will be expedited to other parts of Shanghai in the future. Other cities are currently going through an application process to set up their own FTZ regions.

The main goal of the Shanghai FTZ initiative is for a functional transformation of the government – to shift the overriding role of the government from administrative to supervisory and to promote trade by encouraging multinational companies to set up their Asia-Pacific regional headquarters and/or operations centers in Shanghai, making the city an international trade settlement center. The easing of restrictions on RMB convertibility for capital account items will allow for cross-border financing and fund transfers (currently highly regulated outside the FTZ), allowing enterprises to bypass SAFE (State Administration of Foreign Exchange) for matters involving currency conversion. There has also been talk of implementing tax policies to promote trade and boost investment.

The Chinese cabinet has highlighted six areas of focus for the free trade zone: financial services; shipping and logistics; commercial trade; professional services such as law and engineering; culture and entertainment; and social services including education and healthcare. As expected of a free trade zone, customs formalities are greatly simplified for goods imported into the FTZ. Goods imported by companies in the FTZ may be exempted from import tax. Moreover, declaration on goods can be done 14 days after entry. There is a policy to give an instant pass-through and collective deflation on goods meaning that an importer can bring goods into the country in batches and then declare together collectively once a complete shipment has arrived. An internet-based registration system has been introduced for enterprises, which has shortened the registration period from the 29 days to 5 days. 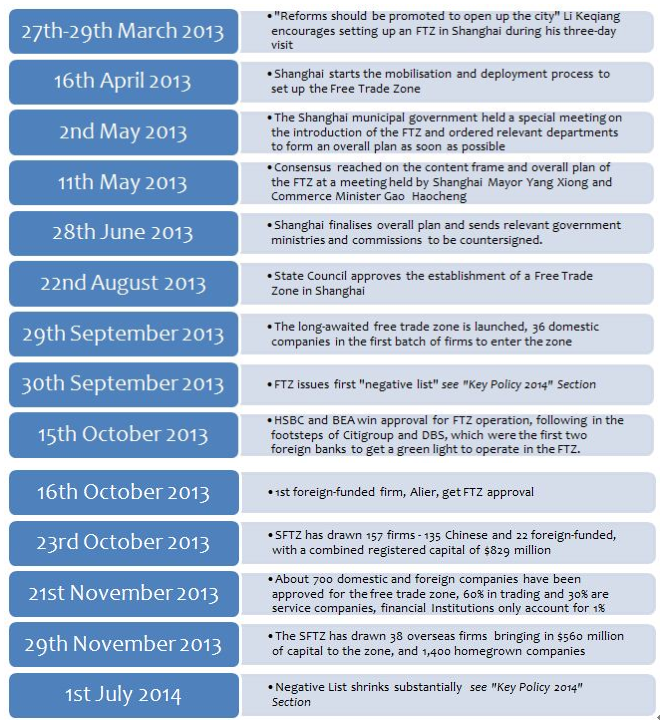 Entries into the FTZ so far include Microsoft (using its FTZ presence for XBox Assembling and software content downloading, creating a market opening for games console production in China) and HSBC (focusing on international banking services targeting corporate customers in the zone, with a view to then expanding its service scope as the regulatory framework for the pilot zone evolves). Other major entry successes for FTZ so far include Citibank, Bank of America, Morgan Stanley, Deloitte, MetLife, Amazon and ArthurMed (the first Foreign-Owned Hospital to establish in the FTZ). Nationwide bans on potentially sensitive websites such as Facebook, Twitter and the New York Times have also been relaxed in the zone in order to make foreigners feel more comfortable.

However, at present, the general consensus among the foreign business community is that there is no real advantage or incentive to setting up in the FTZ. Companies are waiting and watching the situation closely to see if the incentives improve.

The relative youth of the Shanghai FTZ concept is holding it back. The government is still assessing its options; they are reforming cautiously so as to balance risk factors. However this raises a number of challenges for the SFTZ at present. There are currently no implemented tax incentives for businesses, and many benefits of Shanghai Free Trade Zone are shrouded in mystery. “Banks are quite reluctant to invest a large sum of money in the zone … details are still unclear and foreign banks as a whole are not making very good profits on the mainland” says a Shanghai-based executive at HSBC. Many companies are wary as most of the decision-making and political influence in the zone is controlled by Beijing, with Shanghai’s autonomy limited, and it is unclear how revenue from outside of the zone or branches throughout the rest of China can flow in and out of the zone. The FTZ has created a region with potential investment borders and businesses are still yet to receive sufficient clarification as to how this will affect their financial operations. Moreover, other cities also going through an application process to set up their own FTZ regions are counterproductive to the Shanghai FTZ. It further encourages the ‘wait and see’ stance that the majority of businesses have taken.

The most significant development in 2014 has been the publication of the latest negative list, which specifies bans or restrictions on certain types of foreign investment. The initial list, released by the Shanghai municipal government around the time of the launch, covered 1,069 businesses in 89 divisions within 18 main categories. Compared with the 2013 version, the number of restricted businesses has been significantly reduced. However, the 2014 list has been largely met with scepticism from the foreign business community. There are 23 instances where prohibited business sectors were merged and 14 other sectors were erased completely, including; Pornography websites, Real Estate (investment in the agency sector) and Internet cafés. This has therefore distorted the numbers. We conclude therefore that due to the number of merged sectors, this reform was not such a drastic reduction, and is not as significant as is being promoted.

It is disappointing that there has been no headline-grabbing reform in 2014, but we are beginning to see steps forward in certain areas. While the overall volume of setup in the FTZ has been low to date (August 2014), there is still great growth potential and Lehman Brown are watching the situation closely.

This article was prepared by LehmanBrown International Accountants.

This article is intended for general information purposes only and is not intended to provide, and should not be used in lieu of, professional advice. The publisher LehmanBrown assumes no liability for readers’ use of the information herein and readers are encouraged to seek professional assistance with regard to specific matters. Any conclusions or opinions are based on the specific facts and circumstances of a particular matter and therefore may not apply in all instances.